skip to main | skip to sidebar

I think I have it! A solution to the ceremony venue problem.

I wrote a good few months ago (here) about trying to decide what venue to choose when it comes to getting married - as in, the ceremony itself.

The main issue for me, was asking some random priest for permission to get married. On 2 counts - one, to marry at all - which everyone has to do. Two, to marry in a venue which is not an RC church - we had to get special dispensation from on high, a bishop or some such.

I'm a (pigheaded) independent person and I really have difficulty with the fact that he or I should have to ask a stranger's permission to get married. Not only that, but in order to obtain said permission, the RC party has to swear that they will do everything in their power to raise any children we may have in the future, as Mini-RC'ers.

Eh, no. Have you seen the church lately? Damien flagged something interesting on Sunday about it. I will not be raising any chizzlers in a church that hasn't sorted itself out yet. And I'm not going to solemnly swear that I will do so either! Why start a marriage on a lie?

Aside: it has been argued that if we really want to marry that we will cross these "hurdles" and be done with it, because being married is the ultimate goal. While I appreciate that sentiment, it [lying in order to get what you want] does not sit well with me so I kept looking.

So, I have found a solution, I think. One that respects both parties. There's an interesting word for the Catholic church to think about when looking inwardly at their own problems...respect! As in, respect your flock...

It is still possible to have a church wedding, without all the above mentioned rigmarole. You can get married in an Anglican Church, with a lovely friendly (open minded) rector who will go through the kind of ceremony you are happy with, incorporating as much religious stuff as you need or want, without having to go to a registry office. If you still have faith but are disgusted with the RC church right now, you don't have to sacrifice your ceremony. According to the chap we met this weekend in our local CoI church, he has married quite a few 100% RC couples who were just miffed with the permission thing and simply wanted to be married in the eyes of the law and in a church. I had no idea this was an option! How lovely! We don't have to quit one church and sign up to another in order to do it, this particular rector was warm, welcoming and friendly - but not in a way that suggests "hehehe, I'll just notch another one up on the flock-register, harhar..." 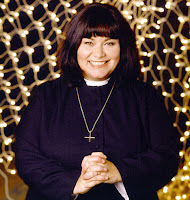 Catholic Church" because of a Vatican decree stating that all couples who wish to marry have to get a blessing from a "real" priest etc. etc. but that would be the case if we were getting married in a hotel or registry office by a civil servant, so hey, if this shoe fits... The Vatican doesn't see vicars or rectors or pastors as men of the cloth anyway - never mind the lady vicars (sorry Geraldine!)

I just wanted to share this information here. I think there are a lot more people out there like us, who wish to marry officially without being constrained to the 9-5 of the registry office. It has taken me months to find this solution and I am so happy we have found it. I hope someone who has the same conundrum finds this useful!